Terry & MaryAnn Barber My story was first published on March 15, 2020 on https://leisurevans.com/blog

For this trip, we traveled from Arizona to the midwestern United States and back home. The only advanced reservation we made was at a RV park in downtown St. Louis, Missouri. The rest of our trip would be space-available stopping only.

A very helpful tool that we use every day when we are traveling is the “AllStays” app. For a one-time fee of $5 to download it onto your phone, you have all the information you need to find any and all kinds of camping available in North America: RV parks, state parks, and national parks, Bureau of Land Management (BLM) land for free or almost free camping, and even locations for boondocking at Walmart. If you don’t have the app, I highly recommend getting it!

We left our home in southern Arizona on March 1, stopping for the first night at Caballo Lake State Park, New Mexico. We quickly learned the difference between state parks and privately owned RV parks: space between campsites, the size of the campsites, and the price. Privately owned RV parks are usually a parking lot where you’re packed in like sardines, while most state park campgrounds are very spacious and cost significantly less. 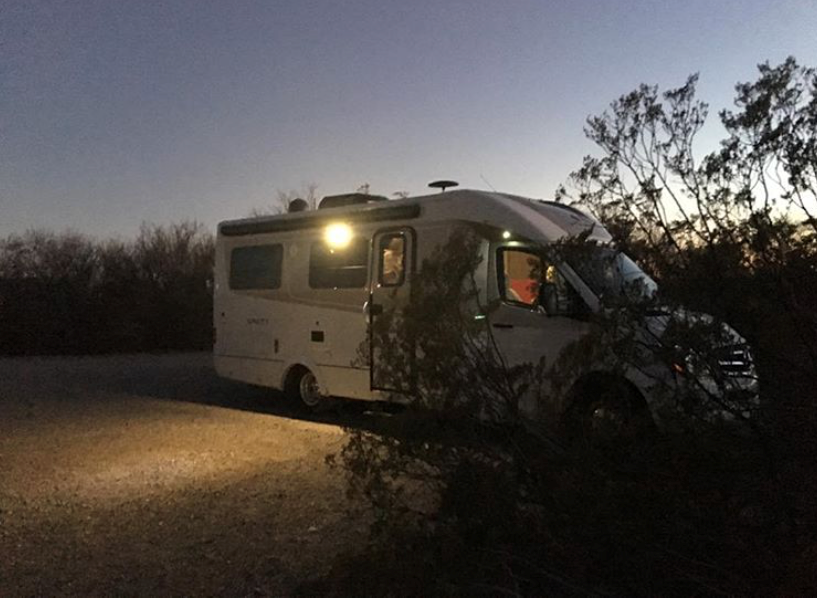 Caballo Lake State Park has beautiful, quiet, spacious campsites with water and electric hookups. There’s a dump station and plenty of hiking trails. The price is right too – $14 per night.

We continued northeast through New Mexico and stopped that night at Ute Lake State Park near Logan, New Mexico. This state park has a pristine lake – visited annually during the month of March by hundreds of pelicans – with the same amenities and price as Caballo Lake.

One of the benefits of traveling during the winter or off season is vacancy in the RV parks. Caballo Lake and Ute Lake were almost completely vacant! With temperatures in the 60s and 70s (Fahrenheit) during the day and dropping into the mid 30s at night, we kept our propane furnace set on 62 at night with a warm blanket on our bed to snuggle up in. It was perfect traveling and sleeping weather. 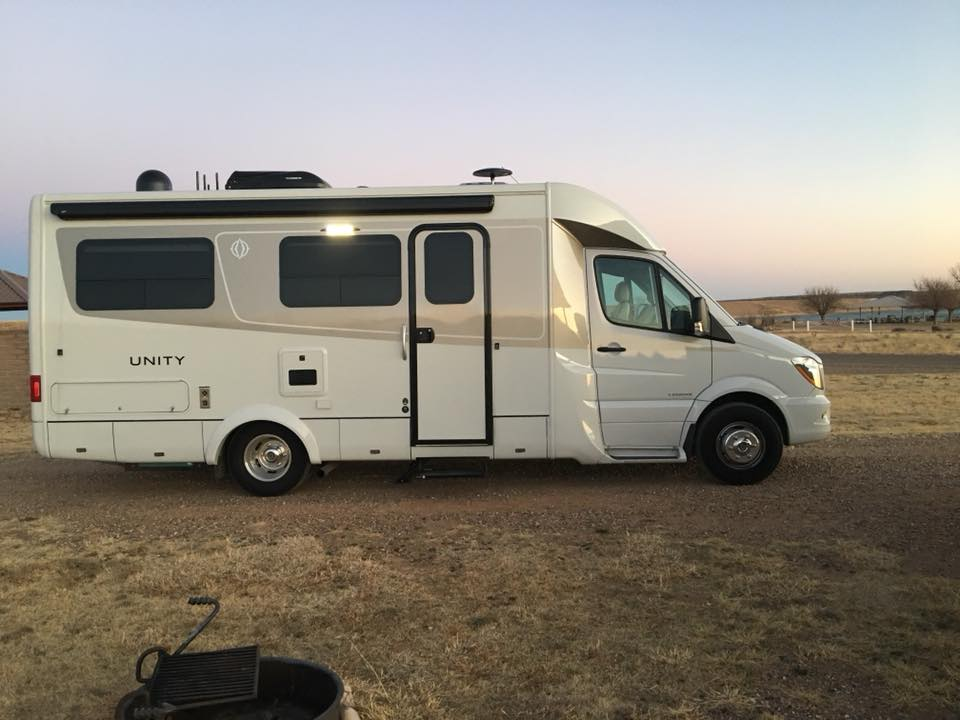 Our next stop for the night was in Pratt, Kansas at Evergreen Inn – Motel & RV Park, a motel with RV parking in the back. The wind in Kansas was relentless, making it difficult to drive and even more difficult to walk. When I walked into the office to check in, the attendant asked if this was our first time in Pratt. When I replied with, “Yes,” he said, “Welcome to the wind.”

We were the only RVers in the Park. The wind blew all night, shaking our Unity back and forth throughout the night. We had water and electric hookups for $30 per night.

From Pratt, we continued north to Marshall, Missouri, where we visited family for a week. From Marshall, we headed to St. Louis, Missouri, and stopped at the only RV park where we needed an advance reservation, St. Louis RV Park. This Park is quite interesting, being situated right near downtown St. Louis and across the street from a police station. Okay, it’s true, we were in a fenced-in parking lot, but we did have full hookups at $45 per night. The Park was completely full due to its close proximity to the arena where March Madness college basketball games were being played. We stayed at the Park for a few days in order to visit with some friends that live in a nearby high-rise, on the fifteenth floor overlooking the city.

It snowed on us in St. Louis, and it was here that we had to replace our first windshield, while it was snowing. We are now on our third windshield in a year and the one we have now has a chip in it. We’ve put clear tape over it to keep dirt out and to help keep it from developing a crack, and so far it has not gotten any worse.

After St. Louis we continued east over the Mississippi River into Illinois, then turned south, crossing over the Ohio River through the western end of Kentucky and Tennessee. We stopped for a couple of nights at the Land Between the Lakes National Recreation Area and Wildlife Preserve on the border of Kentucky and Tennessee, a very beautiful area with a rich history that we highly recommend seeing.

Land Between the Lakes used to be called ‘Land Between the Rivers’ until the government dammed the Ohio, Kentucky, and Tennessee Rivers, creating large lakes. People who had lived here for generations were forced to give up their homes to create this national preserve. It’s a very interesting place with bison, elk, and many other wildlife to see, and we want to go back in the future.

From Land Between the Lakes, we continued south for warmer temperatures. Our next stop was in Jasper, Tennessee, at a beautiful lake called Nickajack Lake, where we stayed at Marion County Park with water and electric hookups for $18 per night. 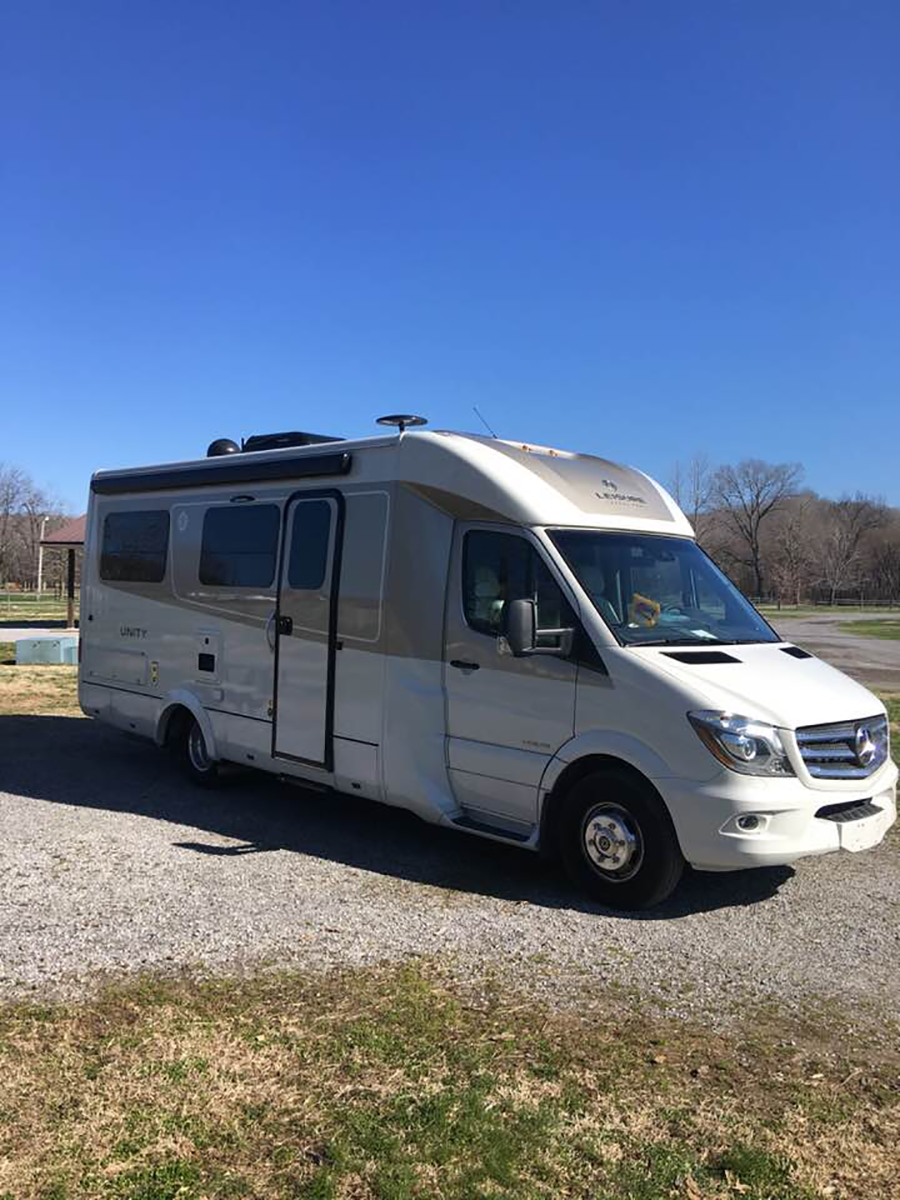 Land Between the Lakes, Kentucky/Tennessee 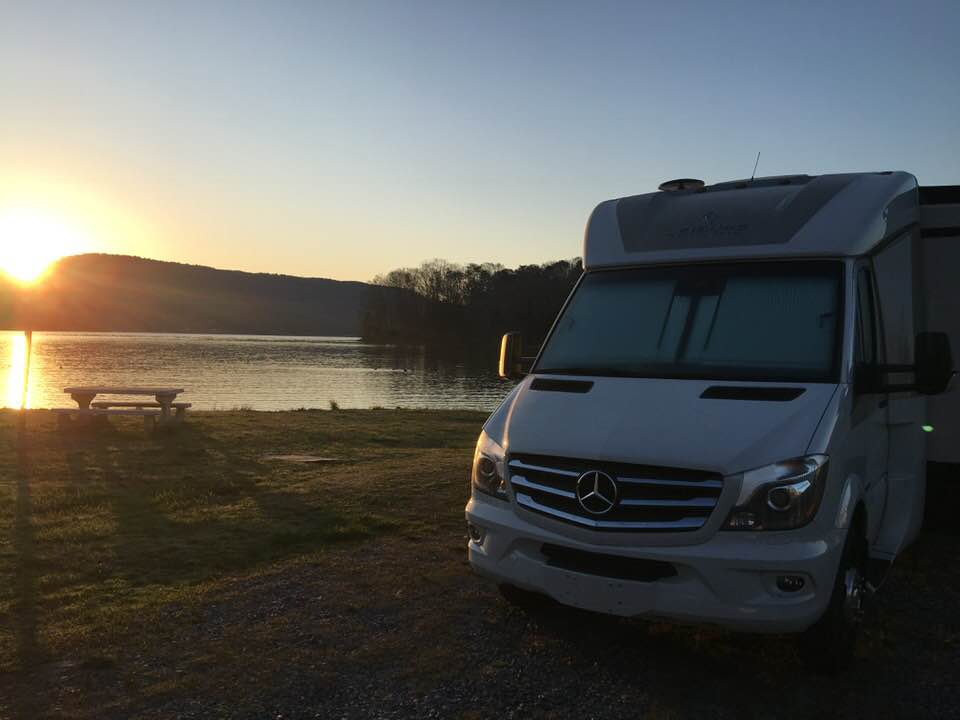 We crossed the Georgia border in mid-March, and by the time we reached Atlanta, temperatures had started to warm up a bit. However, Atlanta traffic is terrible. Somehow we made a wrong turn on the freeway and ended up stuck in a traffic jam that inched along for hours. We finally managed to get away from Atlanta, which by the way is always a traffic jam no matter what time of day, and continued south to Shiloh, Georgia.

Just outside Shiloh is a place called Roosevelt’s Little White House State Historic Site and Warm Springs. It’s a place where Franklin Delano Roosevelt (FDR), the 32nd President of the United States, loved to go. He spent a lot of time there because there were hot springs nearby that he believed helped his crippling polio disease. It’s also where he passed away near the end of WWII. We took note of this historic site, and plan to return on our next trip through the area. At the moment, we were on our way to visit more family, this time in Shiloh, Georgia, and couldn’t take the time for the Little White House this trip.

We driveway-camped again in Shiloh with family for a couple of days before getting back on the road to continue south through western Georgia. Our next stop was at Cecil Bay RV Park in Cecil, Georgia. We tried to go to one Georgia’s state parks, but for the first time we were turned away because the campground was full. We learned very quickly to time our stops so that we weren’t looking for a campsite at a state park on Fridays or Saturdays. Cecil Bay, a privately owned park, was a typical RV park with everyone squeezed in tight and $40 per night for water and electric hookups. However, we were grateful for a place to park and sleep for the night. 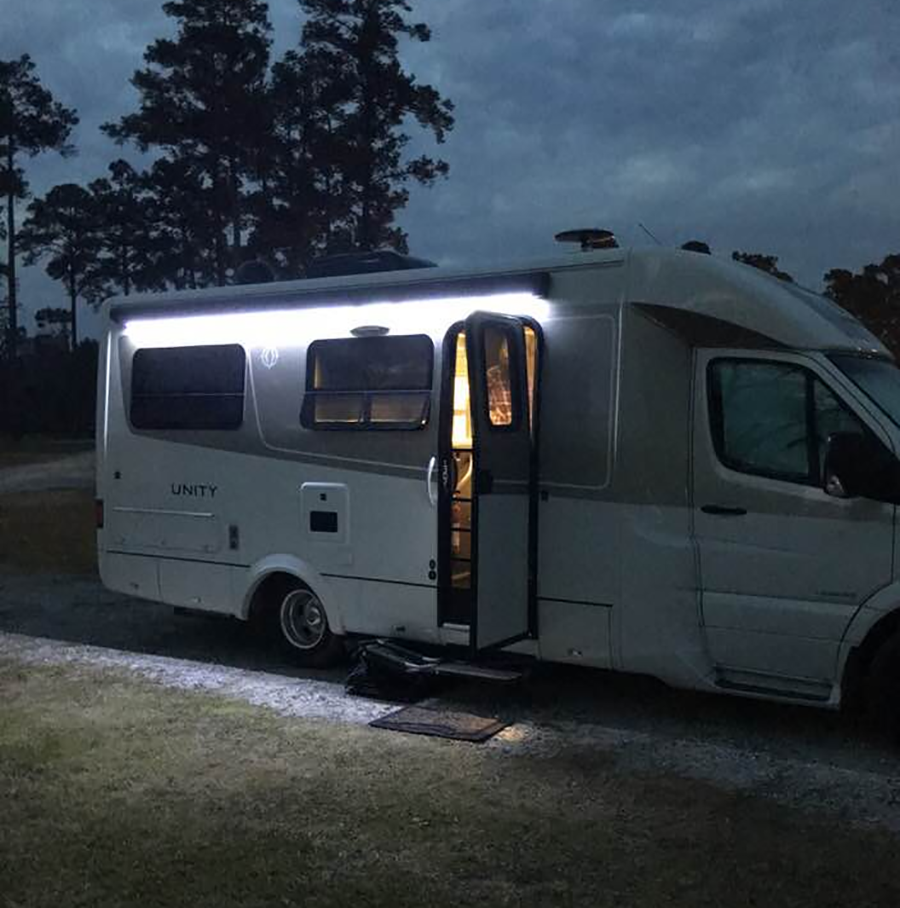 From Cecil we continued south to Orlando, Florida, to visit more family before heading west through the Florida Panhandle. Near Trenton, Florida, we stopped for the night at Otter Springs Park & Campground, run by veterans who give fellow veterans a significant discount on camping. Full hookups were $24 per night.

In the Panhandle, we stopped at Blue Angel Naval Recreation Area, a RV campground for active duty and retired military on the Gulf of Mexico, just southwest of Pensacola, Florida. Full hookups were $30 per night.

The next day we continued our journey through Alabama, Mississippi, and Louisiana. We stopped for a quick visit at the USS Alabama, a retired WWII-era battleship in Mobile, Alabama, before continuing on to stop for the night in Springfield, Louisiana, at Tickfaw State Park in the Bayou. It rained all night and there were signs warning people to not feed the alligators. 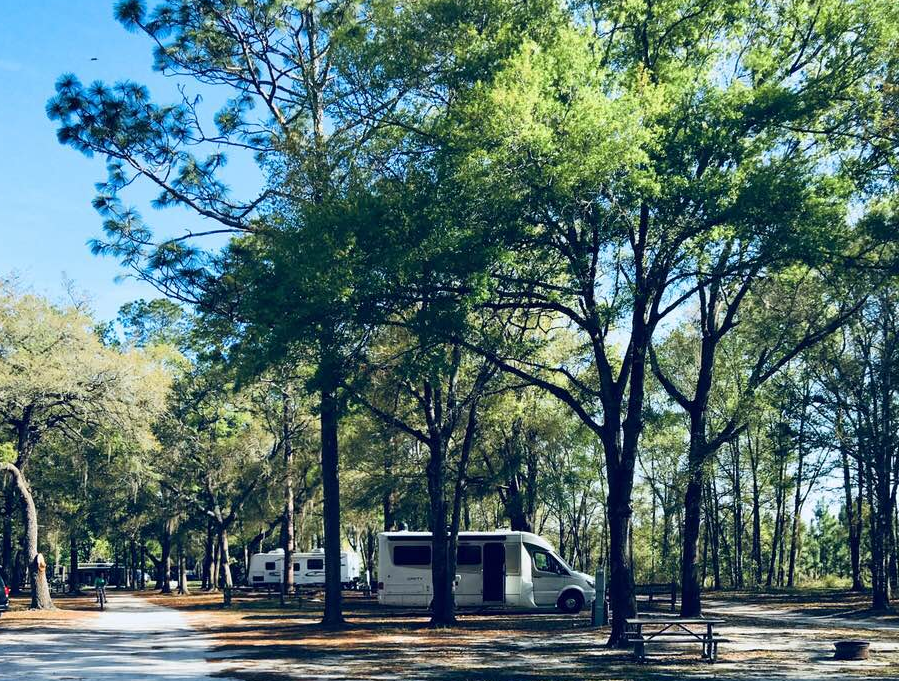 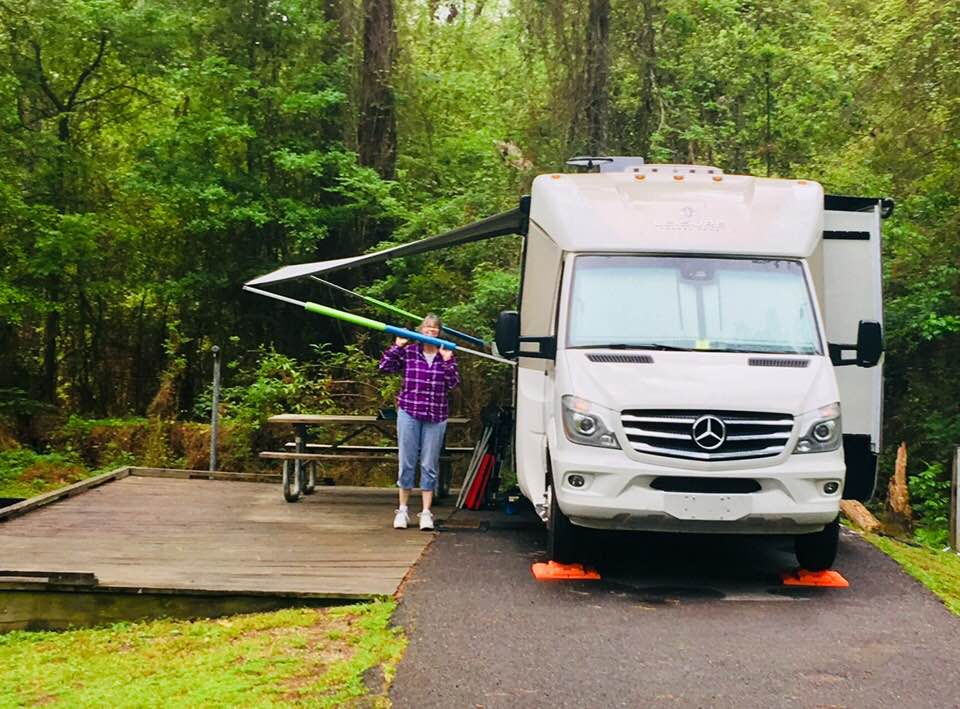 After Louisiana, we crossed the border into Texas. It took us three days to drive across Texas, and on the last day, we drove 14 hours to get home in time for Easter. We didn’t like driving in Texas because the towns were long distances apart, and worst of all, we had difficulty finding diesel that wasn’t 10-20 percent bio-diesel. We found that a good place to buy straight highway diesel in Texas is at any Sunoco station – stay away from the large chains like Luv’s and Pilot with bio-diesel as high as 20 percent.

Our month-long journey took us through 14 states and over 7,000 miles. We were ready to take on Alaska next! 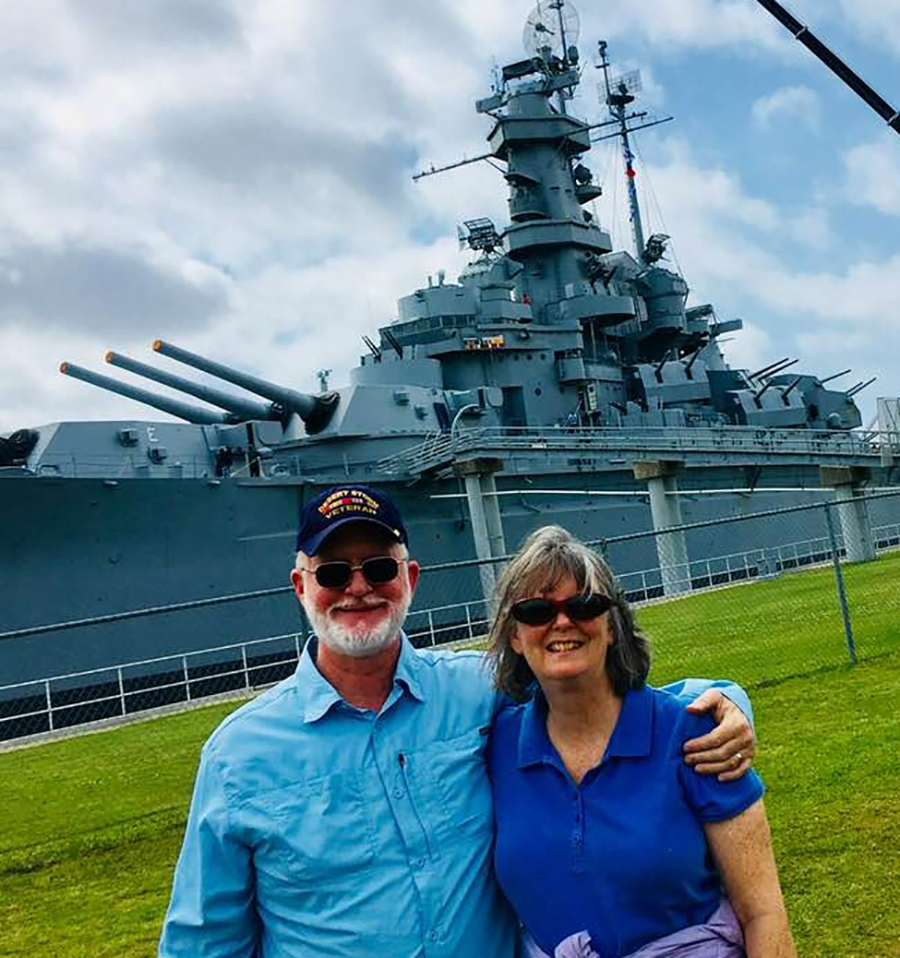 The USS Alabama in Mobile, Alabama

Terry & MaryAnn Barber My story was first published on March 15, 2020 on https://leisurevans.com/blog